What the hell am I doing? Those six words rang through my head as I skirted the edge of a huge boulder, nothing between me and a 2000m drop back to Chamonix, except for a slim edge of rock which I precariously balanced my crampon front points on.

Most people spend their Easter weekend eating their body weight in chocolate, yet I decided to take on a mountaineering challenge unlike any I’ve experienced to date by climbing the Cosmiques Arête.

For many, this Chamonix route is a classic, and I could certainly see why. A satisfyingly pointy collection of rock and ice, the Cosmiques Arête undulates as it makes its way up to the Aiguille du Midi, creating a picture perfect route ideal for a sunny day out. However at around 3800m above sea level, this high altitude challenge certainly wasn’t a walk in the park for my novice self – I’ve got the bruises, scrapes and bumps to prove it.

After catching the lift up to the Aiguille du Midi, there was something supremely satisfying about being one of the first people of the day to step out of the hollowed ice tunnel and onto the snowy arête leading down onto the glacier of the Valley Blanche. Crunching snow underfoot and watching the clouds sweep across the mountain range felt like coming home.

Standing at the Cosmiques hut and staring up at the ridge we were about to tackle prompted slightly different feelings, excitement mixed with terror would be a more apt description. A combination which continued, on and off, for the rest of the morning as I faced different sections of the route.

Despite this, and the huff and puff that comes with little acclimatisation, I felt good, strong even. Although it quickly became apparent that despite having long legs they just aren’t stretchy enough to reach some of the high footholds. And I clearly need to work on my abseiling, after spinning mid-way through one and rubbing my entire side down the rock face – not a smooth move!

The main crux on the Arête might be a no-brainer for a seasoned climber, but trying to negotiate smooth rock, with little drilled holes for crampon points, frozen hands in a crack and weak upper body strength was tough. Add the final section on the route to that, balancing precariously before wedging my entire upper body into a chimney, pulling and scraping my way up whilst hugging bits of rock, and it was pretty clear that I was at the limits of my current technique on this climb.

Stepping up onto the last crest of the ridge line brought both a sigh of relief and a wave of elation, it had been tough but I’d made it. One rattily ladder, and a rather undignified attempt to haul myself over a railing, later and I was back on the Aiguille du Midi, all done in time for lunch!

I had decided to take on the Cosmiques Arête as a test of my skill and nerve, to see how much more I needed to work on before my trip to climb the Matterhorn and Eiger in around 4 months time. I still can’t quite believe that I made it. It was hard work but it feels like all my training at the climbing wall and in the gym, trying to improve both my technique and strength whilst stuck in London, is starting paying off. Hopefully, there’s just a little less rock hugging by the time I get to the next trip. 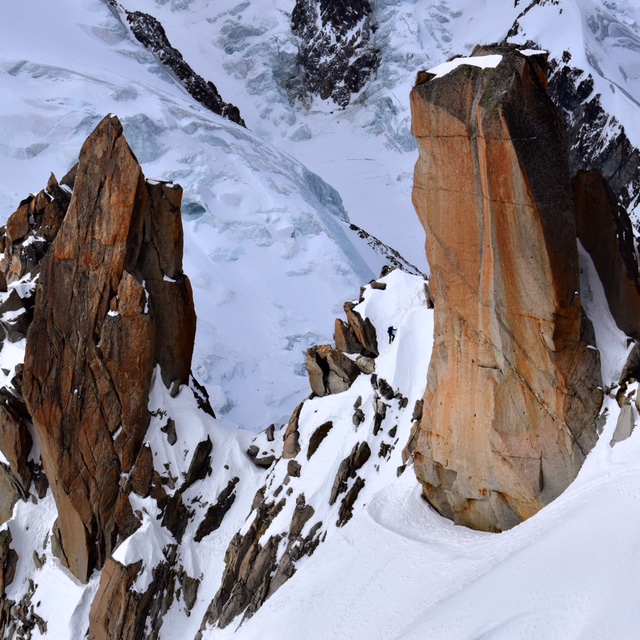 One thought on “Taking on the Cosmiques Arête”