There’s something magical about this sport. Something in the incredibly satisfying thunk of ice axes on a frozen waterfall. The rhythmic noise as you ascend, putting your entire trust in forged steel and treated rope. The bitterly cold winds whipping spindrift into your face. The frozen hair and glittering sheets of ice in the early morning sun. It’s like a warped form of mediation and adrenaline mixed together. And it’s quickly becoming one of my favourite types of climbing.

I’d only ice climbed for a couple of hours a year earlier before booking onto a week long ice climbing trip in the Alps. But my original justification of “oh I’m only doing this for the transferable skills I’ll gain”, has quickly evolved into I want to do more of this, I don’t want to stop doing this, I wish it was winter all year round!

But with heavy snowfall forecast for the Chamonix Valley the week I was due to be climbing, I was a little concerned that my ice climbing trip was about to become a skier’s paradise. It later transpired that there was so much snowfall over that week that a number of chalets were evacuated due to the avalanche risk.

Thankfully my concerns about missing out on ice climbing weren’t to be. After a day checking competence levels on a single pitch ice fall in Valorcine, France, our guides took us round to Cogne in Italy for the remainder of the week, where the forecast looked at least a little less white.

Climbing in the valley around Cogne is ideal for a novice ice climber. There are enough easy routes that even the most beginnerish of beginners can comfortably learn what to do, whilst still providing enough variety so that those progressing quickly can get stuck in with harder, longer routes without the need for lengthy treks in.

Unsurprisingly for anyone who knows me, this meant I quickly started getting competitive with myself over what I could accomplish, ultimately resulting in an attempt at climbing with no ice axes at all. It was comical to say the least! My balance clearly still needs some work.

After a couple of days on Cascade de Lillaz, a sweet little set of icefalls just outside Cogne, we headed for a route further down the neighbouring valley past Valnotney.

The only way I could describe the conditions that day would be Scottish. After a trek in through Narnia-esq woodland, spotting Chamois between the trees, we arrived at the base of the falls to substantial gusts of wind and light snowfall, though whether it came from the sky or the floor was anyone’s guess.

The route starts out gently enough, with each subsequent pitch gaining in steepness and

enough room at the belay points between pitches that on a glorious blue sky day you could happily hang out and wait for your fellow climbers. As it was I spent most of my time at the belay points hunkered down as close to the ground as possible to prevent being blow over by the wind. At one point the wind had blown so much snow around it had formed a little wall around me whilst I waited to take my turn on the ice. This also resulted in some significant hair freeze, something I’ve come to discover is a given if you have long hair and a passion for being in the mountains in winter.

After topping out on the falls, we made our descent down a steep snow field at the side. As we carved our way through thigh deep snow, all I could think was that rather dangerously I could see this easily becoming an addictive addition to my climbing repertoire. It’s the ultimate balancing act between strength, technique, understanding of the environment and trust in your own abilities. 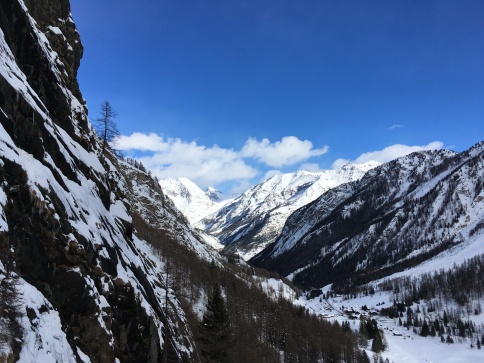 One thought on “Back On Ice”